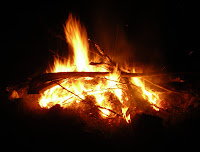 The night critters singing their high pitched songs, made the air tingle with energy. The autumn chill made the fire a hot attraction! It was their anniversary of nothing, and they planned to celebrate accordingly.

Pulling a plastic Adirondack chair closer to the warmth, Opal sipped her wine and grinned. “This is perfect,” she stated as if someone asked her opinion.

Bervis poked and prodded the fire pile to make room for more wood. The fuel was old newspapers, junk mail, bill collector’s threats in unopened envelopes, and the fallen branches of last winter’s ice storm collected in the yard for just such a night as this. The sparks rose high on the heat of the compiled elements, drawing oo-oo-oo-s and a-a-a-h-s from Opal like the fireworks displays on the 4th of July draws from the crowd.

This Ozark hills October night had been long awaited. Opal and Bervis had suffered through the summer months of heat and a declining economy, like many across the country, but refused to fall victim to the grief others expressed. Like those who think, “well I still have them checks, so I figgered I still have money in the bank!” , Bervis and Opal decided to burn those bills, in effigy, so they would owe them no more.

Call it hillbilly ignorance, stupidity, naivety, or hilarity, Opal and Bervis found great pleasure in burning their way to what they perceived as financial liberty and freedom.

Toasting the night away with cheap boxed wine, pretzels and occasional sighs of relief, Opal wondered why the country was out “occupying Wall Street”, when the answer was so simple. Bankers got the Bail Out; Opal and Bervis got the Burn Out!